I look back on that day frequently because, I can’t tell where I am now. I don’t know. And not knowing is my worst punishment.

I had worn white. It was unnaturally bright-I shimmered like an apparition in the strong sun. From my window, the only thing I could see was the blue sky. So blue, in fact, it looked like the oceans of the earth were sent to heaven in one mighty splash. A few clouds floated lazily, like fish that drift with the current.

Crows. They were everywhere. Some stopped to perch on my window. They regarded me with beady eyes. Suddenly they began twisting and coiling…and were not crows anymore, but a giant serpent.

Its tongue flickered. I woke up with a start. Naps often invoked the worst nightmares. Outside, I heard a crow hiss.

Dusk fell, and I still hadn’t eaten anything. I took a few sips of water every now and then. I looked out my window again, and saw the sun fall heavily, awkwardly, leaving a mess of colour behind. It’s strange how the sky went from blue to bruised.

I sat back on my chair and closed my eyes, biding time. I didn’t need to wait long.

“Come on, let’s go,” said a voice from outside. I stood up, drank a glass of water and walked out the door one final time.

I could see the moon now, sparkling like all the diamonds I would never be able to gift my wife. I sighed, and began climbing a flight of stairs. When I reached the top, I looked all around me, just like an artist who surveys the audience before his performance. For the first and last time in my life, I experienced stage fright.

I beheld the noose dangling before me, its insides frayed. I tried to count the number of necks it had snapped, and added mine as well.

Then I closed my eyes, and kicked the stool. 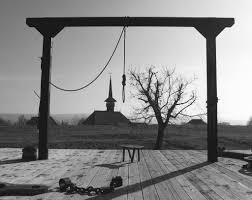 Pens have anger. That's why they scratch. View all posts by artiche

2 thoughts on “Memories of a Forgotten Man”